Humans were using spices in 50,000 BCE[citation needed]. The spice trade developed throughout South Asia and Middle East in around 2000 BCE with cinnamon and pepper, and in East Asia with herbs and pepper. The Egyptians used herbs for embalming and their need for exotic herbs helped stimulate world trade. The word spice comes from the Old French word espice, which became epice, and which came from the Latin root spec, the noun referring to "appearance, sort, kind": species has the same root.

By 1000 BCE, medical systems based upon herbs could be found in China, Korea, and India. Early uses were connected with magic, medicine, religion, tradition, and preservation.Archaeological excavations have uncovered clove burnt onto the floor of a kitchen, dated to 1700 BCE, at the Mesopotamian site of Terqa, in modern-day Syria.[4] The ancient Indian epic Ramayana mentions cloves. The Romans had cloves in the 1st century CE, as Pliny the Elder wrote about them. 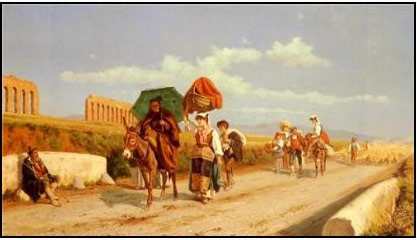 In the story of Genesis, Joseph was sold into slavery by his brothers to spice merchants. In the biblical poem Song of Solomon, the male speaker compares his beloved to many forms of spices. Generally, early Egyptian, Chinese, Indian, and Mesopotamian sources do not refer to known spices.In South Asia, nutmeg, which originates from the Banda Islands in the Molukas, has a Sanskrit name.Sanskrit is the ancient language of India, showing how old the usage of this spice is in this region.Historians believe that nutmeg was introduced to Europe in the 6th century BCE.

Indonesian merchants traveled around China, India, the Middle East, and the east coast of Africa. Arab merchants facilitated the routes through the Middle East and India. This resulted in the Egyptian port city of Alexandria being the main trading center for spices. The most important discovery prior to the European spice trade were the monsoon winds (40 CE). Sailing from Eastern spice growers to Western European consumers gradually replaced the land-locked spice routes once facilitated by the Middle East Arab caravans

Spices were among the most demanded and expensive products available in Europe in the Middle Ages, the most common being black pepper, cinnamon (and the cheaper alternative cassia), cumin, nutmeg, ginger and cloves. Given the medieval medicine’s main theory of humorism, spices and herbs were indispensable to balance "humors" in food, a daily basis for good health at a time of recurrent pandemics.

Spices were all imported from plantations in Asia and Africa, which made them expensive. From the 8th until the 15th century, the Republic of Venice had the monopoly on spice trade with the Middle East, and along with it the neighboring Italian city-states. The trade made the region rich. It has been estimated that around 1,000 tons of pepper and 1,000 tons of the other common spices were imported into Western Europe each year during the Late Middle Ages. The value of these goods was the equivalent of a yearly supply of grain for 1.5 million people. The most exclusive was saffron, used as much for its vivid yellow-red color as for its flavor. Spices that have now fallen into obscurity in European cuisine include grains of paradise, a relative of cardamom which most replaced pepper in late medieval north French cooking, long pepper, mace, spikenard, galangal and cubeb.

The control of trade routes and the spice-producing regions were the main reasons that Portuguese navigator Vasco da Gama sailed to India in 1499. Spain and Portugal were not happy to pay the high price that Venice demanded for spices. At around the same time, Christopher Columbus returned from the New World, he described to investors new spices available there.

Another source of competition in the spice trade during the fifteenth and sixteenth century was the Ragusans from the maritime republic of Dubrovnik in southern Croatia.The military prowess of Afonso de Albuquerque (1453–1515) allowed the Portuguese to take control of the sea routes to India. In 1506, he took the island of Socotra in the mouth of the Red Sea and, in 1507, Ormuz in the Persian Gulf. Since becoming the viceroy of the Indies, he took Goa in India in 1510, and Malacca on the Malay peninsula in 1511. The Portuguese could now trade directly with Siam, China, and the Moluccas. The Silk Road complemented the Portuguese sea routes, and brought the treasures of the Orient to Europe via Lisbon, including many spices.

With the discovery of the New World came new spices, including allspice, bell and chili peppers, vanilla, and chocolate. This development kept the spice trade, with America as a late comer with its new seasonings, profitable well into the 19th century.In the Caribbean, the island of Grenada is well known[clarification needed] for growing and exporting a number of spices, including the nutmeg, which was introduced to Grenada by the settlers.

© 2016-17. The content on this website is owned by Registrant of domain www.jabsinternational.com.Website designed & developed by www.mesotek.com | Our Domains